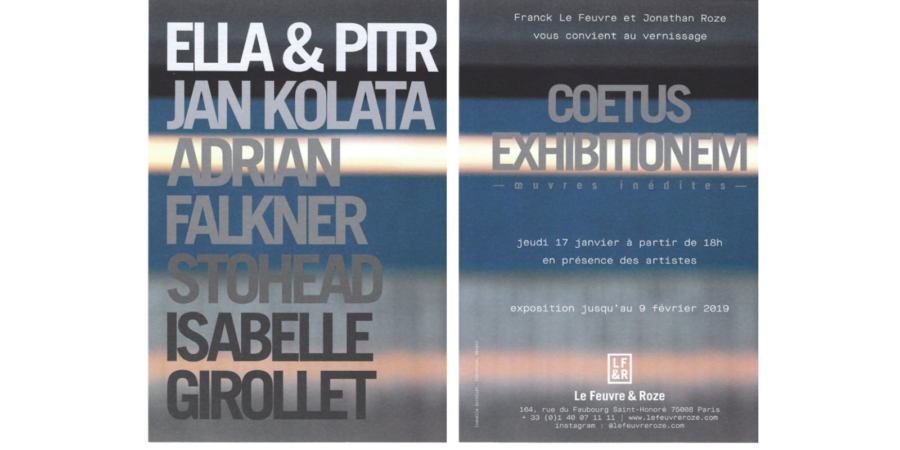 To begin 2019, Le Feuvre & Roze presents Coetus Exhibitionem, a collective exhibition adding to four artists of the gallery one fifth: Isabelle Girollet. The French photographer will be exhibited for the first time on rue du Faubourg Saint-Honoré alongside Jan Kolata, Ella & Pitr, Adrian Falkner and Stohead. Coetus Exhibitionem draws its originality from the unpublished character of the works that will be presented. The simple act of linking photography to painting is already a great first for the gallery, which until today collaborated with only one photographer: Michel Séméniako, in 2008. And when Séméniako presented a work of urban landscapes concrete, recognizable, freezing his attention and his objective for hours to get his shot, Isabelle Girollet applies to shoot the moment. None of her photographs are reworked yet their composition as much as their subject intrigue. These photographic abstractions, which sometimes make us think of painting, also speak to us because they allow us glimpse these objects of our daily life. But these objects are captured under such angles and presented in such compositions that they can’t be recognized. It is then our unconscious that does all the work for us.

Coetus Exhibitionem also highlights the ambition the gallery has been pursuing since the first day: supporting its artists in their evolution, thanks to the bond of trust woven over the years. This bond of trust, allowing frankness and constructive debate as to the evolutions of each one, which has been reinforced thanks to the place: 164 rue du Faubourg Saint-Honoré. Indeed, at the time of immediacy and ephemeral (online galleries, platforms, Instagram), the Feuvre & Roze argues that a gallery must be the privileged place of presentation and experimentation for artists, allowing at the end collectors to regularly see the work done. That’s why Coetus Exhibitionem will also be an opportunity to discover new works. A new direction for Ella & Pitr, connected to their previous work but marking a break anyway; a series of parallel works, not yet unveiled at the gallery, by Adrian Falkner; a return to research around Stohead’s first loves; and new paintings by the artist – Professor Jan Kolata.

Located in the historic street of “Faubourd Saint-Honoré” in Paris, the Le Feuvre & Roze Gallery represents a dozen of French and international artists. Its particularity; the selection of its artists and the creation of strong links with them always with the aim of presenting unpublished works for the blooming of the collector. “Geared towards a visual art that must conjure substance as well as form—first the latter, because for Le Feuvre & Roze, the artwork should quickly establish a dialogue with the person receiving it, but without revealing everything all at once, and without seeming inaccessible. Form is always crucial, because a given work must be able to fit into a collection, an interior, and be a source of joy for whoever looks at it every day.”

Visit the website of the Le Feuvre & Roze Gallery.